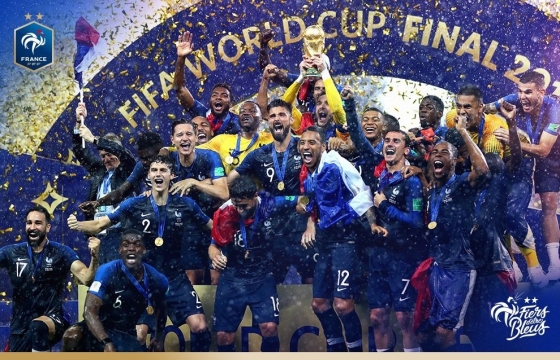 Every four years the same bullshit: as soon as a European country with more than one black player in its national team starts winning games in the World Cup, the dormant racist shows his/her true colors.

Nobody mentions the fact that, in the case of France, goalkeeper Hugo Lloris has Catalonya roots and defender Lucas Hernández’s parents are from Spain. No. The only thing that matters for these idiotic, ignorant turds is the fact that Pogba, Mbappé, Dembele and other black players for the newly crowned World Champion are “African.” Never mind that all except one (Umtiti, born in Cameroon but in France since age 2) were fucking BORN in France. I could go on and on forever, team by team, pointing out evidence of the effect migration has had on those teams (even those without “Africans”), but better let Fernando Santullo speak.

Santullo is a Uruguayan rapper and journalist who, on June 21, published a must-read opinion piece in Búsqueda, a major Uruguayan weekly. With his permission, I translated the Spanish-language piece into English. It is, in my opinion, the text that better describes the problem with people saying France, for example, is “not really French” due to the presence of “naturalized Africans” in the team (another false statement).

Note to American (U.S.) readers: when I say “football” I’m obviously referring to what you call “soccer,” whatever that means.

Here Santullo’s story in Búsqueda (click here for the original link in Spanish):

One of the things that become clear during World Cups is that the issue of varieties of skin color, that topic of great interest to racists, is much more entrenched than they would like. Today, there are too many countries whose national teams show highly evident signs of how their societies have been transformed through recent and not-so-recent migratory flows.

This is also visible if you travel a little. It doesn’t have to be New York or Paris; I think of Buenos Aires, which is not so far or foreign to Uruguayans: in Argentina’s capital it is possible to find people from many places and, especially, those people’s children, already born in Argentina. Talking about children born in another country, if we get rid of the term “recent” when referring to the migration flows, you can see that almost all of us who live in Montevideo or Buenos Aires are the result of previous migration flows. And let’s not even talk about the children of the most recent immigrants we’re having the fortune to receive.

What a football World Cup allows us to see is how lots of people react before this new reality; how, for many people, a class vision persists which is concerned with pointing out a player’s ethnicity only when that player seems to come from a poorer country than the country he’s playing for.

I was asking myself on social networks, in a rather crude way: What is racism? Racism is to point out the origin of an English player when he is black and not when he is white. Or when he is a German of Turkish descent and not when his origins are, say, French. Or when you associate, probably unwittingly, citizenship and ethnicity. Moreover, racism appears when your little mental boxes point out ethnicity according to that person’s socioeconomic origin: ethnicity only matters if the player’s family comes from a poorer place. Let us not forget racism is always classist.

Besides being discriminatory, this vision is static and unhistorical. It is discriminatory because the comment about skin color, without fail, is always accompanied by a denigrating expression. It is static because it is not capable of accepting that these changes are taking place. So static that, oftentimes, those who spit out these types of things are people who, at one point in their lives, have migrated to other countries in search of a better future. But, of course, they’re white or, at least, that’s how they perceive themselves and, therefore, they don’t believe they’re part of this global mobility — that’s something people with less light skin do. And it is unhistorical because, almost without exception, that vision comes from people whose parents, grandparents or great-grandparents were migrants. Ignoring their own past, they don’t even try to understand that the present that surrounds them is a process that includes them and their great-grandparents. They barely look at it like a still photograph that slides in front of their eyes without any intelligible connection to their own personal past. Or collective, as it would be the case in cities like Montevideo or Buenos Aires.

At the same time, during a World Cup it is easy to see that these multi-ethnic national teams represent countries which, generally speaking, are usually richer. And we always come back to the same thing: it is the economy, stupid! People migrate in order to improve their material life, especially when their material life is practically nonexistent, mere survival. That’s why the negative pointing out of a player’s ethnicity (“These negroes can’t be French…” I heard 1,000 times when Uruguay lost against France in the U-20 World Cup final in 2013) only occurs when we’re talking about people who come from poorer countries — the poor is a migrant; the rich, regardless of ethnicity, is an investor or entrepreneur. It is a case of pure and almost always invisible classism. And many times, maybe out of the fashion of remembering the family origins of a player without realizing the bias I’m talking about, the sport journalists themselves are the ones who reproduce these nefarious habits.

This low-intensity classism-racism (its promoters don’t consider themselves one thing or the other, obviously) always necessitates the construction of an “other” to practice it upon. When it does not construct it in a clear and visible way, the ideology’s stench is barely noticeable: in Uruguay, almost no one has ever become scandalized by the fact that the proportion of poor blacks doubles that of poor whites; that’s part of the landscape and it is disguised as folklore: “They don’t want to progress, they just want to play the drums down on the corner.” And this is how they attempt to explain the fact that there are almost no citizens “of strange color” (as Rubén Blades said in “Plástico”) in the university system. Deep down, this vision mirrors the paternalism that characterized slavery in [Uruguay]: the blacks were “servants,” not slaves in a plantation. That closeness dilutes appearances and soothes hearts: The racist is always the other.

That is why it is interesting to see how that classism-racism blossoms, automatically and in HD but never admittedly, during World Cups. The ball reddens hearts and activates xenophobias that were, until then, dormant and without a clear objective. When the ball rolls and is touched by the opponents, the phobias find their objective and become explicit: “These guys are not English… Where have you seen a black Englishman?” Or French: “How can he be French if his parents were born in Réunion island?” The sad part of these questions thrown in the air by the Racist 2.0 is that the answer is simple and direct: You see plenty of black French and black English in France and in England, as it happens.

In a recent interview with Le Monde, Fernando Savater recalled something that is key in this issue: “Modern citizenship is not having the need to have blood from any particular place in order to be a citizen of a country.” That’s something hard to understand for the ethnicist, who believes citizenship rights must be associated to a particular skin color, origin or genetics.

Lastly, I have news for the xenophobic team: the world will never again be what your phobias and attractions thought they were. And I say “thought they were” because imaginary purities were never real: migration never stopped happening since we left the Horn of Africa and expanded ourselves throughout the world. And it will never stop happening: for as long as people understand it is worth moving and risking one’s life when it comes to look for a better life, migratory processes will continue happening and enriching us.

Thanks to that, we won’t stop enjoying Özil’s German technical skills, Pogba’s French power or Sánchez’s Uruguayan suede-shoe foot. Even if their skin color itches them, all the Racists 2.0 can do is learn how to scratch themselves.

(Originally published in Spanish 0by Uruguay’s Búsqueda on June 21, 2018)